Well, you can be sure I was surprised when I received a call from the David Letterman show last week while sitting on the beach with my children. It was Karen and she wanted to know if I was still interested in tickets to be in the audience for Monday, July 18th. Well hell yea! She told me to call Molly McGinnis of the audience department to set it up and answer a trivia question. So here I am, standing at Cedar Beach, Long Island, NY....trying not to move too much for fear of loosing my connection, calling Molly to get into the show. Got a recorded message and left my number.....not long after, Molly called me back....and asked me a few questions...like where I live, how long have I been watching David.....and the dreaded trivia question. You see, I stink at Trivia....anyway...she said it would be easy. The question was...."What does Alan Kalter do on the show?" Ok, well even I know that one! I said he was the announcer, the guy with the red hair...of course I got it..no problem...phew! The people at the Letterman camp were so nice, very polite and upbeat, which didn't surprise me since I think David is such a decent guy...it would only make sense that his people would be, as well. By the way....last March...I decided to apply for tickets through the web page....choose July cause it was a friend of mines birthday and thought it would be a neat gift.

So, I am now talking to Molly McGinnis, of the audience department...and I am thinking she must be related to Sid McGinnis of the band....well, this gal is just the sweetest thing....and she wants to know if the guest I listed would be attending. That person was not able to come with me so I had to change the name of the guest....and as we all know ..the rule is.....no changing the guest! Alas, I actually had to change the guest twice before I was done and they were just fine about it. No hassle whatsoeva! Ok, so, Molly tells me to be at the "ED" between 2 and 3pm to sign in and when I get there, to go on the yellow, reserved ticket line. We do all this and as we are standing on line.....which has wrapped around the block and we are now standing in front of the Hello Deli........ interns from the show are handing out forms to fill out if you have anything to contribute to the show...like "stump the band" or "stupid people/pet tricks.." and the way it works is that if you have something to offer they would contact you to come back for another show. Which works for me since I live on Long Island and so I put in for stump the band. Let's see what happens...will let you know if it does. Ok, so now we stand on this line for not more that 15 minutes...thank goodness cause it was soooo hot and muggy that day. We get to the theater and have to give our names and mention that we are on Molly's Gold List.....at that point we are in the beautiful, air conditioned lobby of the Ed Sullivan Theater....our names are checked off the list, we show our license and we are given tickets....which they number with a big black marker across the front of it. Then they put us in groups of like 30 and give us the instructions, come back by 3:30 to get in...the filming starts at 4:30 sharp. We should line up in numeric order. I was number 129 out of 400 and something. So off we went to have lunch but before that, we stopped at the Hello Deli for a quick picture with Rupert Jee.....he is exactly like what you see on the show....so we ask him if we can take a picture with him, he kinda laughs and says yes...(I will try to link picture, especially since the AFL sticker is right there! ) So as I am getting my picture taken with Rupert I say to him...."Lookit you with all this celebrity, isn't this funny!" he says....."David has been so good to us". Sweet, very sweet.

Ok, so now we are back in front of the "Ed", on line 1 hour later...in numeric order....waiting only a short time before they usher us all into the theater....in the lobby again, we are given some do and don'ts....from this guy...who funny enough....looked like a younger...smaller version of David...it made me laugh...he said.....no whistling.....booing...or calling out.....that we should clap and laugh a lot and have a great time! So, then we are brought into the theater...(they collected our tickets as we went in...darn, I wanted to save mine)......I sat in about the twelfth row, center of the center section. I thought I had great seats until the camera, Tony and others, crowded around David's desk and I could barely see David or the guest....had to watch the monitors.....but wait I am getting ahead of myself here....back up....so, when we were being seated, the interns are now at the head of the isles...clapping and we were to clap along as we were seated....then....this large-ish guy in a suit comes out and gives us the dos and don'ts again...and tells us to follow his lead on when to clap... he then points out all the people moving about on the stage and tells us who they are, like Biff Henderson, Alan Kalter. He introduces the band one at a time....they come out and start to play their instrument...until all have been introduced...with Paul Shaffer being the last and most important. The band plays a couple of songs which we clap along with....and then about 3 minutes before the show is to start....David comes running out from behind the stage....with a kind of gazelle leap .....no jacket......and he grabs a microphone and starts tapping it against his hip...making this loud noise.....makes a funny face...ya know..stretching his mouth the way he does and laughs.....then he comes right to the edge of the stage and say...hi...isn't it hot?.....tells us that he was on vacation in Montana.....and as he is talking....he has hit foot resting on this large, moving type, camera.....and using the foot pedal, is making the camera go up and down while he is talking.....then every once in a while he would tap his microphone against his hip again to give us a jolt.....very funny, so casual and cozy....ya know.....like you're hanging with him in his home.....which I guess we were... right! Ok, so after this, he asks if anyone has any questions.....and the woman in front of me....jumps up with her hands in the air...(I think it was planned) and asks her question....first he asks her name and where she is from...and after that she starts by saying that she has been a fan of the show for over 20 years....back to when Paul still had hair....David and Paul got a kick out of that.....and she wants to know if Paul uses foundation (makeup) on his bald head....Paul repeats her question....then says....he puts foundation on places she could never guess. Big laugh for all......David only took the one question....David tells us there is now about 1 minute 30 seconds before the show is to start... says he has to go take his "medicine"? and goes running back stage again...only to appear in the back of the stage moments later, behind that screen, with jacket on now and talking to one of his assistants, which he ran up to ...he seems to like to run around up there...(I saw him run three times).........then we are signaled to start clapping, the screen lifts and David starts walking toward the camera.....the rest of the show you know.

During the commercials....we are shown, on the monitors, highlights from pervious shows...without sound...during the interview with Billy Bob Thorton....we had to watch the monitor because David's desk is hidden behind all the cameras and camera people....Funny things I noticed....first, you can tell when David starts to improvise on what is said....cause Tony Mendez drops his queue cards down, kind of impatiently waiting for David to finish his shtick...then he holds them up again when David is back on track...also Tony was dressed like such a slob....I mean that T-shirt he was wearing was soo worn out and wrinkled .......funny.... I also noticed that during the commercials...David and Billy Bob didn't talk to each other....David was either talking to his assistant or reading his notes and Billy Bob was talking to some woman, could have been one of David's people keeping Billy busy so he wouldn't bother David...I am thinking there was absolutely no connection between the guest and host....

Next up was the musical guest....Jermaine Dupree.......ok, he was not my thing but alas......David sat at his desk the whole time....and when they were finished, he shook hands....then when the show was over...David went to the drummer in the rap group and must have been asking about his drums...cause he was touching the bass drum....which was on a platform about hip level......after David walked away the drummer and his bass player did a high-five ...over the attention they got from David, I am guessing.

So the show is now over and David takes that same microphone from the beginning...and says..." Good night everyone, thanks for coming." Waves and goes behind the stage...exit stage left.

It was such a blast being there and seeing it all - up close and personal...thanks for the idea Millsy, I had such a great time! I couldn't get over how terrific the audience was....very supportive of Dave...everyone was really into it........I loved seeing how it all comes about. The whole experience was very pleasant and I would really like to do it again, just as soon as I am able.

I hope you enjoyed my dissertation of my visit to David Letterman's show. Let me know if you have any questions.

I've posted this on the site with permission of Janie, the author. -- DDY 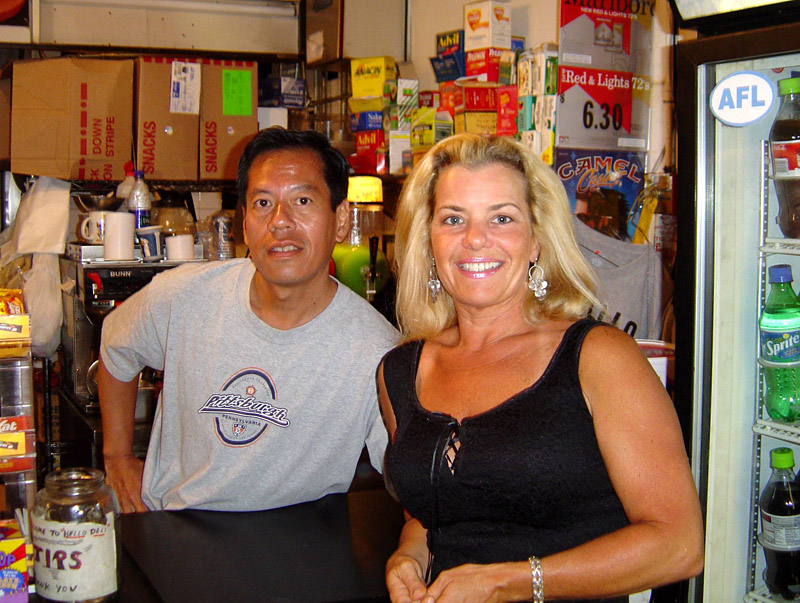